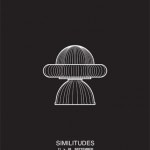 The idea: While its manufacturing technique, dating back to the XVIth century, is arduous, opaline glass remains an exquisite material for the creation of lamps. A collection of unique pieces was first shown at the Milan design salon in 2012. This unique series was made up of existing mass-produced elements and combines two precious materials, resulting in translucent white opal glass with a glow rivalling that of porcelain. The lamps exhibited today are the result of a long working process during which certain obstacles had to be overcome. The quest for a glass master who was capable of blowing the transparent globe and the realization of the porcelain base were our main difficulties. His approach to set up a production in which artisanal techniques play a central role, questions our dominant consumption model.

The object : the lamp’s opal globe consists of three layers of glass, mouth-blown and shaped using a wooden mold. This ancient technique allows the production of a limited series. The lifespan of a mold, which gradually wears out with every print, is limited to about fifty pieces. As a consequence, each unique item, numbered and signed, has its own qualities and little aberrations, inherent to artisanal production. The other mold, used to create the porcelain base, consists of five dismountable pieces that are assembled to generate a perfect casting. Once taken out of the oven, these elements are joined together by the designer, forming an elegant lamp that disperses a warm and soft light, mirroring the materials at its base. 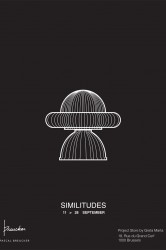 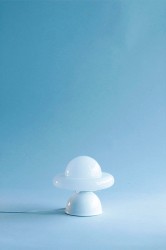 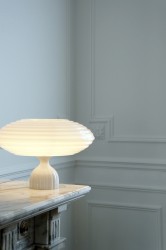 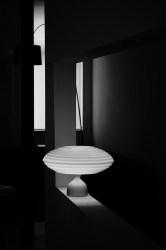